cards, chipcards and/or RF cards, the CIS-4000 Series is the ideal system for the daily encoding of medium card volumes.

To make possible a rapid switch between full and empty stackers, the system is equipped with changeable hoppers.

The enclosed version is being used increasingly in the bank sector, as well as for the encoding of client cards, resort, canteen and ID cards. 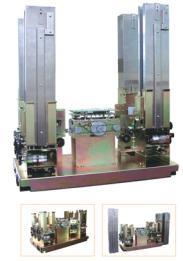 The OEM Version is used by device and system manufacturers.

This entry was posted in Allgemein. Bookmark the permalink.