In order to meet the increasing demand for systems with Legic readers, we offer a reading
and writing module that can be perfectly integrated into our output systems and transport
units due to its compact size.
LEGIC reader chips conform to ISO 15693, ISO/IEC 14443 and ISO 18092 (NFC).

Posted in Allgemein | Comments Off on LEGIC module for card readers, card encoders and dispensing units 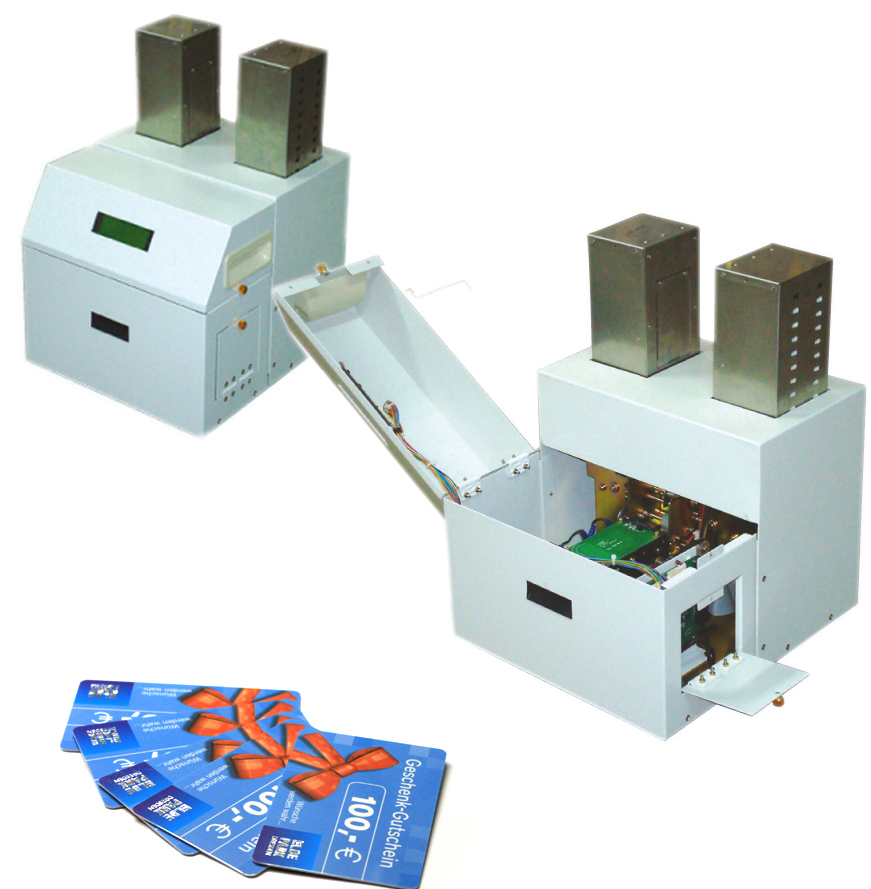 CIM-5000 and BAT-9000 Series
Value cards, gift cards, and prepaid cards can cause considerable damage if they are lost.
Kiosk systems and shops require secure card dispensers, which safely store charge cards in a steel cassette until they are dispensed and also store returned charge cards in a closed cassette.

The CIM-500 and BAT-9000 series card dispenser and collector offer secure cassettes for storing and dispensing or returning charge cards.

The CIM-5000 card dispenser’s cassettes can only be filled via a CCM-5000 card filler and the cards can only be dispensed via a CIM-5000 series card dispenser. Cards cannot be manually removed from the stacker.
Each cassette has its own electronic ID in order to permanently verify its presence.
In contrast, the BAT-9000 system works with a steel dispenser stacker, which is equipped with a safety lock. Cards can only be filled or removed by the owner of the key, or they must be dispensed via the system. Cards which have been fed in are safely stored in a likewise closed security cassette.

Both systems have reading and encoding units for magnetic, chip, and RF cards. You can contact info@transmac.eu for more information and data sheets. 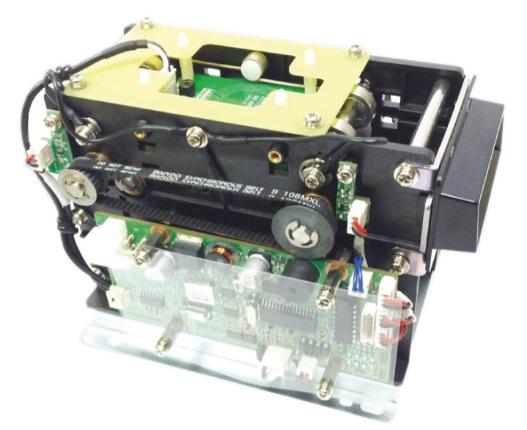 The KYT-1000 series RF reader and encoder is mainly used in applications today where it is necessary to check, trace, or eliminate cards. Defective cards can be eliminated via the card conveyor and are placed under the device. Access control, banking systems, and marking systems are the preferred fields of application for this device.

Posted in Allgemein | Comments Off on The “new” is here! 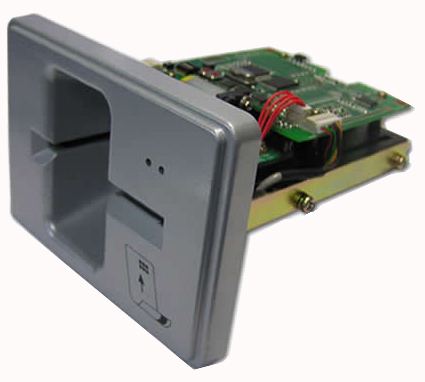 Due to popular demand, the successful KYT-7400 series card reader is now available with a standard black mouthpiece. The device is notably popular in the fields of banking systems and access control. Additional colors and customized mouth pieces are available.

Posted in Allgemein | Comments Off on KYT-7400 Series 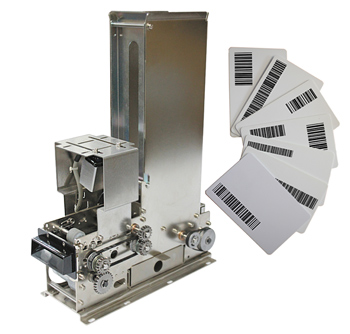 Posted in Allgemein | Comments Off on BHM-2200 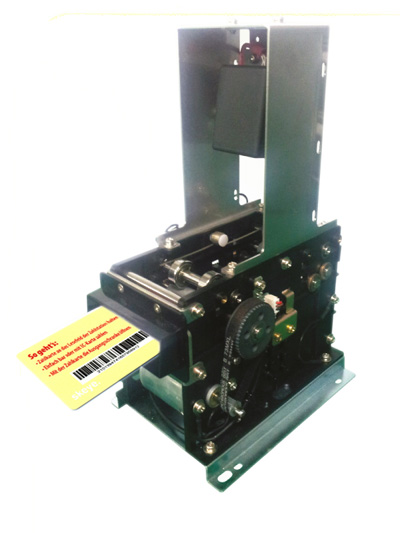 This device is used in the canteen system, ID system, and charge card markets and is characterized by its high reliability. Building on the KYT-1000 series motorized transport unit, the BYT-1000 guarantees a long service live and outstanding reading performance.
The integrated card feeder makes it possible to both return the card and to eliminate invalid cards under the device using a card conveyor.

Posted in Allgemein | Comments Off on BYT-1000 Series

From the 19th to the 21st of November 2013, our new products in the card technology field were presented at the CARTES exhibition in Paris.
The biggest and most important European exhibition in this industry attracted over 20,000 international industry professionals. 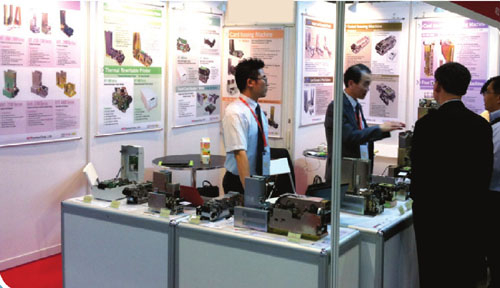 We would like to thank each client, who has
made their way to the trade show, for the interesting conversations, projects, and suggestions.

CPS Series Card encoder for chip cards, magnetic cards, and RF cards, with an integrated color printer (thermal sublimation printer) for 4-color, double-sided card printing, as well as for thermal rewrite printing for monochrome imprinting, erasing, and reprinting of the same card up to 500 times

TIM-3000 card dispenser system for tickets and parking systems.
The system processes and separates fanfold/leporello cards. ISO standard 14443 Type A, Mifare 1K, 4K, Ultralight and DesFire tickets can be read and written, defective cards can be eliminated before being dispensed (error card capture function).  The card can be printed with the integrated 200dpi thermal printer.

Posted in Allgemein | Comments Off on Cartes 2013 in Paris

The “ICE Totally Gaming” exhibition took place in London from the 4th to the 6th of February 2014, which was the biggest and most important exhibition for the gaming industry in Europe at the time.

Transmac is a leading supplier of card technology in the slot machine industry, thus we can use this exhibition to conduct extensive talks with our national and international clients. 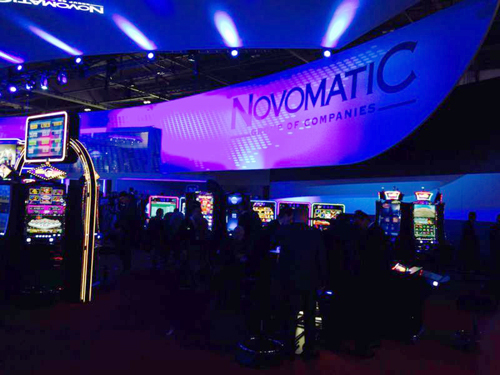 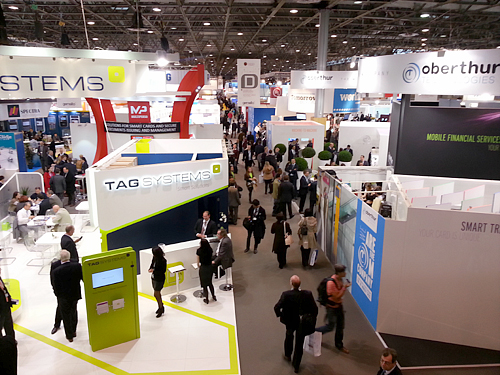 In addition to talks regarding existing projects, we can also present our new product developments which have really caught on. Our employees can take orders for more than 40 development kits for the tests and construct our new devices.

Posted in Allgemein | Comments Off on ICE Totally Gaming London

Colored mouthpieces are particularly in demand in the kiosk systems and in the gaming sector. Transmac now provides card readers with color-coordinated mouthpieces.

Cards up to 120mm in length can be dispensed with the KYT-2700 Series card dispenser. This series also processes individual cards packed in plastic film, like e.g. phone cards.
Applications for this device include vending machines for phone cards as well as systems for issuing customer and event cards, cards for ski lifts and gaming systems. 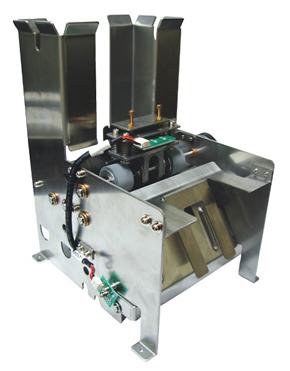 Posted in Allgemein | Comments Off on KYT-2700 Series card dispenser for packed cards and cards in special sizes.